Thousands of devotees visited the Holy Lights From Tibet exhibition, touted as the world's largest collection of ancient Buddha relics and Tibetan antiques. 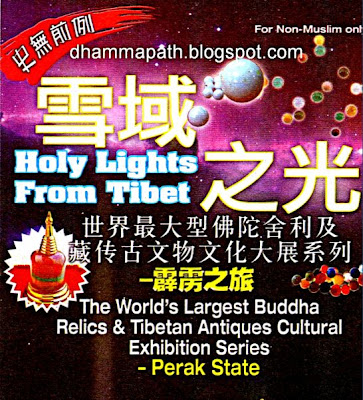 The three-day exhibition was held at the Perak Girls School hall in Ipoh from Aug 28th to 30th 2009.

The entire hall itself was transformed into a kaleidoscope of images and colours with elaborate displays of thousands of relics like Buddha's hair, tooth, flesh, blood, brain and bone placed carefully in shiny glass showcases.

.
Numerous ancient paraphernalia used by monks of the past dazzled visitors as did the hundreds of colourful Tibetan thangka depicting the life of Buddhist deities and lamas which were strung from floor to ceiling.
.
Relics of Buddha's disciples like Sariputra, Mogallana, Upali, Sivali, Ananda, Purna, .... as well as the Arahants were also displayed during the exhibition, which was put together by the Menglembu Kadhampa Centre.
.
All the relics and items on display belong to the 18th Dromtug Rinpocde Losang Choekye Pelden, who is the highest rank of Rinpoche of the Kadhampa lineage of Tibetan Buddhism. 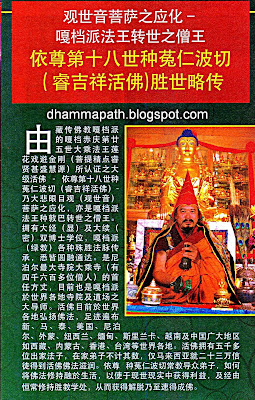 His Holiness the 18th Dromtug Rinpoche is a highest ranking Rinpoche, as certified by the 25th Atisha Jiangqiu Tilei - Dharmaraja of the Kadhampa Lineage of Tibetan Buddhism. His Holiness is a Dharmaraja who is the emanation of Avalokitesvara (Kuan Yin), the reincarnation of Dromtonpa - the Kadhampa Dharmaraja and a Geshe in both Sutra and Tantra Buddhism (which is equivalent to a double Ph.D. degree in Sutra and Tantra Buddhism).
.
His Holiness is the first Abbot of the Mahayana Monastery, the largest monastery in Nepal having over four thousand monks, and is currently the advisor of the Kadhampa Monasteries and Associations in the world. Rinpoche has perfect Dharma lineage from Tsongkhapa, such as the lineage of sravaka, pratyekja and mahayana, the four tantras from Tantric Buddhism, the four empowerments of the maha-yoga practice, and Rinpoche have attained perfect practices and realizations of Kye-rim and Dzong-rim ...etc.
.
Over the past years, Rinpoche has been actively promoting Buddhism in Singapore, Malaysia, Thailand, United States, Nepal, Outer Mongolia, New Zealand, Myanmar, Sri Lanka, Vietnam, and China greater areas such as Tibet, Inner Mongolia, Hong Kong and Taiwan. Rinpoche currently have over five thousand lama disciples and countless number of layman disciples, including not less than 230,000 in Malaysia alone.
.
His Holiness Dromtug Rinpoche has always been teaching and guiding his disciples ways to incorporate Buddhism practices into daily life, so that one not only could achieve tangible results in life but more importantly, through constant practice of the Dharma, could be freed from the rebirth - cycle and finally reach enlightenment. 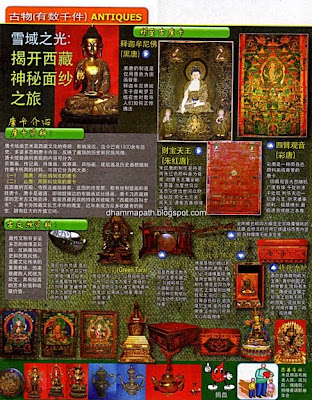 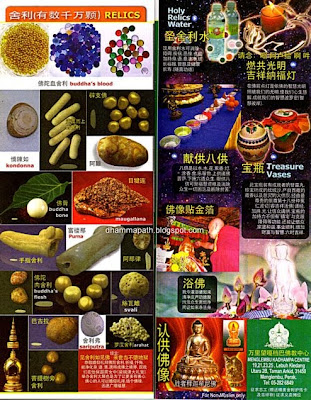 See more photos of Buddha relics, thangka, Tibetan Antiques, ...... at my next post. 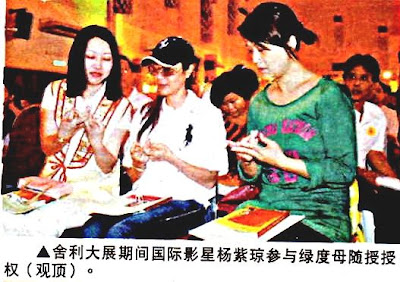 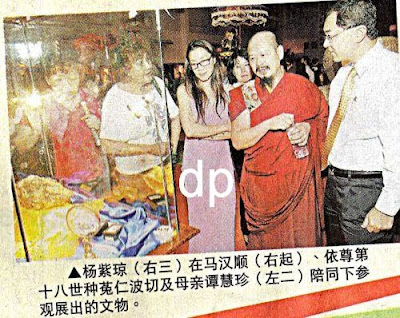 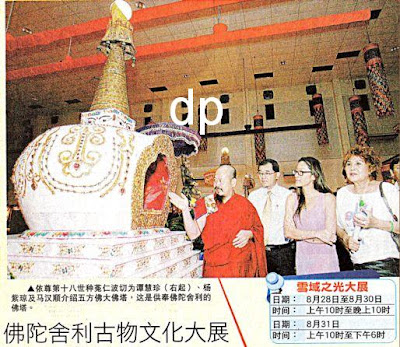 Photos from local newspaper.
.
During the exhibition's launch on Friday, officiated by Perak state executive councillor Datuk Dr Mah Hang Soon, Buddhist celebrities - Datuk Michelle Yeoh, and devotees witnessed how a hair relic could twist and twirl by itself when a mantra "om mani padme hum" is chanted.
.
See more Thai amulets at:
http://www.thaiamulets-dhammapath.blogspot.com/
.
Posted by Kenneth Phoon at 8:28 AM