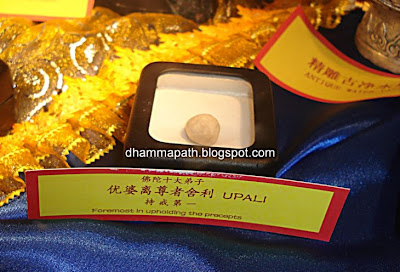 Upali was foremost in upholding the precepts.
.
Upali was born of the lowest class in the India society (the untouchables). He had a weak body, thus his parents made him into a barber. Upali was well-liked by others, soon he became the barber for the Shakya princes.
.
Upali was ordained before the seven princes. He became the foremost in upkeeping the precepts, never breaking any of them. He was often asked by the Buddha to settle disputes among the Sangha. Upali's impartialness and strictness made him successful in all cases. Upali also consulted the Buddha in many precept doubts and monastic way of life, giving rise to many sutras.
.
Upali was in his seventies at the first council. He helped with the compilation of the Vinaya.
.
See more information of Thai amulets at:
http://www.thaiamulets-dhammapath.blogspot.com/
Posted by Kenneth Phoon at 9:19 AM