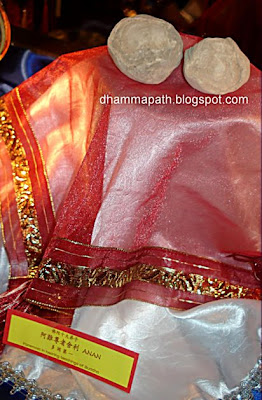 Ananda was foremost in hearing the teachings of the Buddha..

.
"Face like a full Autumn moon, Eyes that of a pure lotus flower, the teachings of the Buddha is as vast as the ocean, which flows into the heart of Ananda." This was the poem used to describe Ananda.
.
Ananda was the younger brother of Devadatta. Ananda was the youngest among the 7 Shakya princes who followed Buddha. Shortly after he was ordained, he helped persuade the Buddha into allowing the setting of the order of nuns. When he was in his twenties, Buddha was 53. Due to Buddha's elderly age, Sariputra and Mogallana invited Ananda to attend to the Buddha. Since then Ananda was always with Buddha. .
Ananda did not attain Enlightenment until after Buddha's final Nirvana and shortly before the first council. However his pleasantness in personality attracted others and commanded their respect. There were people who were wary of Buddhism, thus would void Buddha and his disciples. However they were attracted by Ananda's pleasantness and hence gained faith in Buddhism. This is the best case of propagating Buddhism by example.
.
Ananda gained Enlightenment just the day before the first council. In the first council he recited the sutras for compilation. He became the chief monk after Mahakasyapa passed on the authority to him. At age 120, he entered final Nirvana at the River Granges which ran between two cities to pacify a war.
.
See more information of Thai amulets at:
http://www.thaiamulets-dhammapath.blogspot.com/