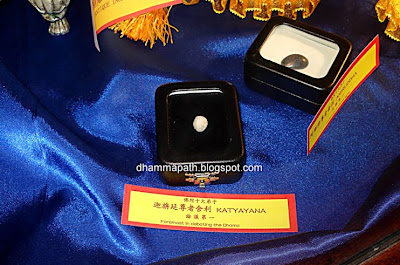 Katyayana was foremost in spreading the Dhamma.
.
Katyayana was born to a rich family with loving parents. However he realized impermanence and chose to seek the truth. He attained Arahantship quickly after following Buddha. Katyayana was extremely enthusiastic about spreading the Dhamma.
.
He realized the 10 qualities a propagator of the Dhamma must possess: knowing the Dhamma, ability to explain the Dhamma, public speaking ability, persuasiveness, skillful means, ability to follow what is preached, of pleasant appearance and personality, possessing right energy, tired-less, and commands respect. When propagating the Dhamma, he perfected the 4 qualities of skillful means, using the right medicine for the right sickness, knowing the right time, and completeness of the Dhamma.
.
With the help of Katyayana, Buddhism spread quickly and widely during Buddha's time. The Buddha praised Katyayana as the foremost among his disciples in spread the Dhamma.
.
See more information of Thai amulets at:
http://www.thaiamulets-dhammapath.blogspot.com/
Posted by Kenneth Phoon at 11:27 AM