My second stop was ChiangRai. It's only a short ride from ChiangMai, easily done by car during the day. In this part 1, we sharing the temple photos and part 2 will sharing the Museum of Wat Phra Kaew.
Wat Phra Kaew is one of the oldest and most revered Buddhist temples in ChiangRai and unclear when the temple was founded. The temple was originally called Wat PaYeah, meaning the Temple in the Golden Bamboo Forest, as it was surrounded by a dense yellow bamboo grove locally known as Yeah or Yah. In year 1434 the temple’s octagonal Chedi (Pagoda) was struck by lightning and it fell apart to reveal a Buddha covered with stucco inside. The Buddha was then placed in the abbot's residence, who later noticed that stucco on the nose had flaked off, revealing a green figure inside. The abbot removed all the stucco and found a Buddha image made of a green semi-precious stone, which became known as Phra Kaew Morakot or the Emerald Buddha. "Emerald" here simply means "green coloured" in Thai. The temple has been thus called Wat Phra Kaew after this holy Buddha image ever since. 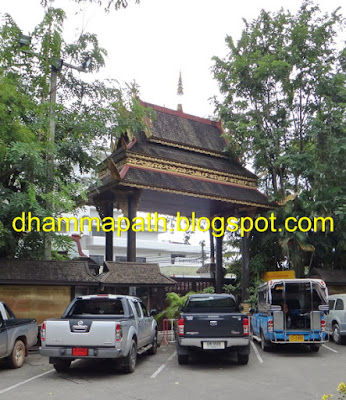 One of the temple main gate. The Wat Phra Kaew is a Royal Temple in Chiang Rai and one of the oldest in the city. Although the exact year the Wat was founded is not known, it goes back at least to the end of the 14th century. 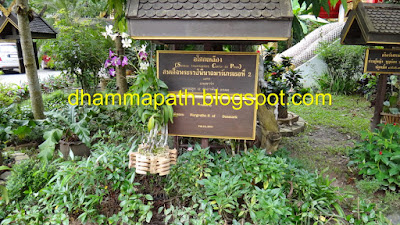 The orchid planted by Queen Margrethe II of Denmark, on 12 Feb 2001. 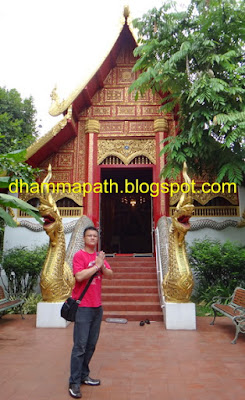 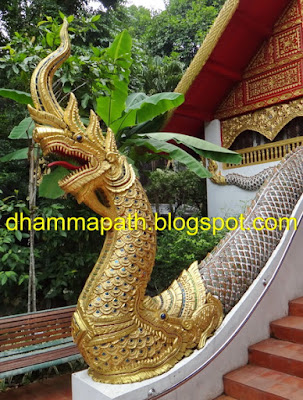 The stunning and glitter image of Naga image as Guardian in front of Ubosot. 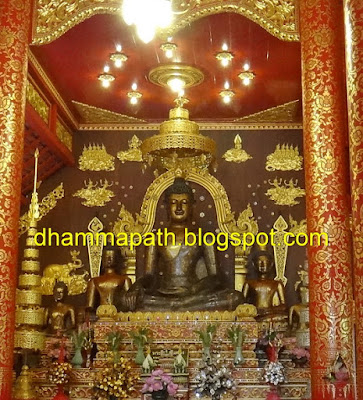 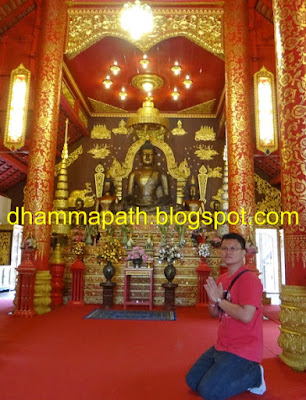 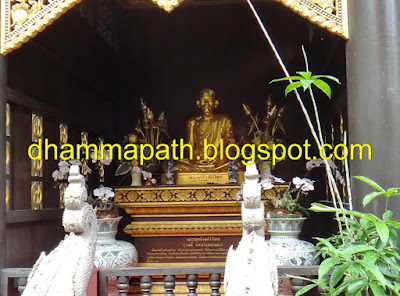 The past abbot statue venerated in shrine. 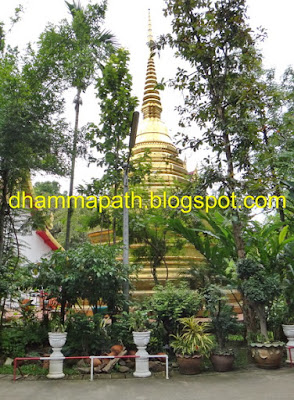 The octagonal Chedi (Pagoda) at Wat Phra Kaew. At the rear, behind Uposatha hall is the Chedi inside which the Emerald Buddha was found in 1434. This typical Lanna style pagoda had been subsequently renovated, the last renovation was in 1992-1993. 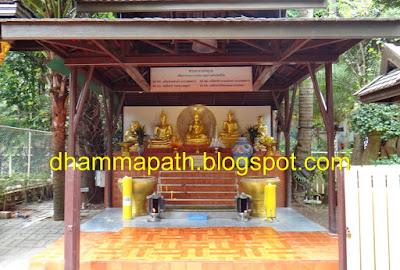 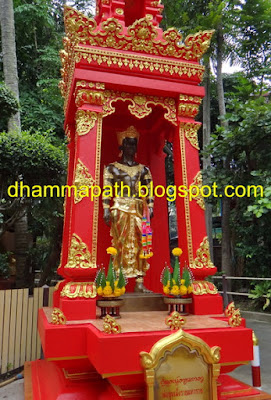 The small shrine for Phra Buddha images and King MengRai. 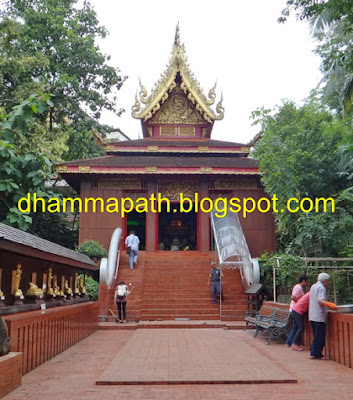 At present Phra Yok Chiang Rai is housed in Haw Phra Kaew (Jewel Buddha Chamber).  The teak wooden chamber, 8 metres in width and 12 metres in length, was built in ancient Chiang Saen style.  Its model was created by a renowned artist Thawan Datchanee. At front side also located the pond for fishes and turtles. 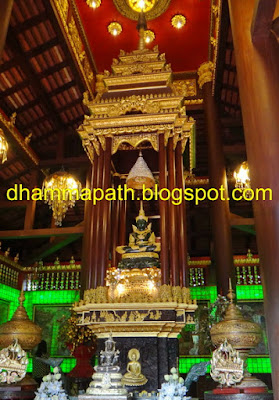 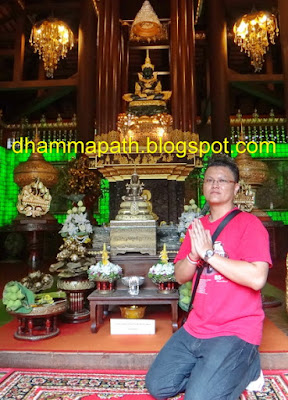 The Photo taken with Emerald Buddha Phra Kaew Marakot. In 1990, a new Phra Kaew Marakot image was commissioned and carved in China out of Canadian jade in honor of Her Royal Highness Somdej Phrasrinkharintra, the Princess Mother's ninetieth birthday. The image is an intentionally close but not exact replica of the Phra Kaew Marakot in Bangkok; it is 48.3cm wide across the lap and at 65.9cm high, it is just 0.1 cm shorter than the original. The new image is called Phra Yok Chiang Rai (Chiang Rai Jade Buddha) and is housed in Haw Phra Yok. A dedication ceremony was held in Bangkok on 20 September 1991 (BE 2534) and the image was installed with a grand procession at Wat Phra Kaew, Chiang Rai on 19 October of the same year. 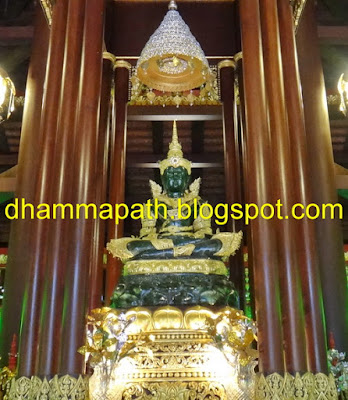 According to legend by Ratna Phimwong written in Pali by Phra Bhrompanya in 1729 AD, the Emerald Buddha was sculpted by gods to present to Venerable Nagsen Thera (500 BE), who stayed in Asokaram of Pataliputra (now Kumhar in Patna, India).  Subsequently the image was moved from place to place before being presently housed in Bangkok as follows:
1.      Sri Lanka
2.      Cambodia
3.      Angor Wat in Cambodia.
4.      Sri Ayudhaya, old capital of Thailand
5.      Lawo or the present Lopburi province
6.      Vajiraprakarn or the present Kampaeng Phet province
7.      Chiang Rai for 45 years from 1391 to 1436
8.      Lampang for 32 years from 1436 to 1468
9.      Chiang Mai for 85 years from 1468 to 1553
10.     Luang Prabang and Viantiane of Lao for 225 years from 1553 to 1778.
And finally in 1778, during King Taksin of the Thonburi period, when King Rama I of Bangkok was still a general, he captured Vientiane and brought the Emerald Buddha back to Thailand. With the establishment of Bangkok as the capital, the Emerald Buddha became the palladium of Thailand and has been ever since. The image was moved from Thonburi to the Temple of the Emerald Buddha in Bangkok on 22 March 1784.  The image has been regarded as the most sacred object in Thailand.
***source by watphrakaew-chiangrai.com 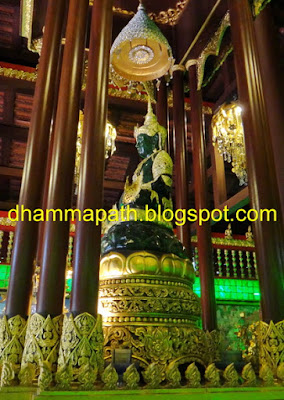 The side view with elegance. 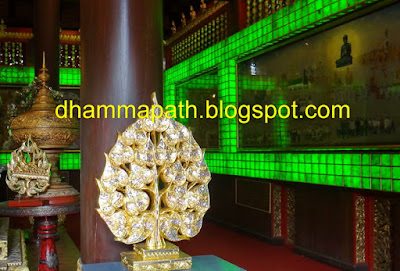 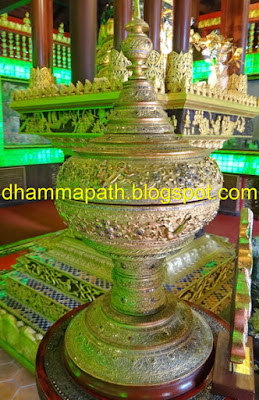 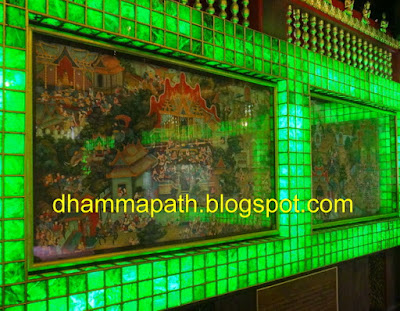 The mural traditional paintings on the walls of Haw Phra Yok depict the legend of the Emerald Buddha, whereas the temporary paintings depict the history of Phra Yok Chiang Rai. 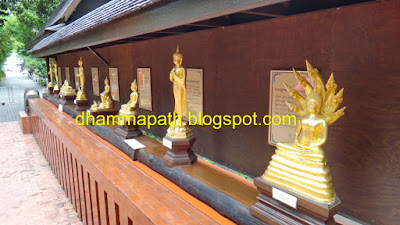 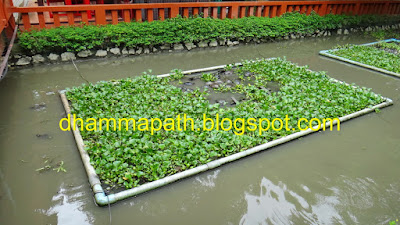