Wat Phra Kaew ~ Temple Of The Emerald Buddha In Thailand.

The Wat Phra Kaew ~ Temple of the Emerald Buddha, full official name Wat Phra Sri Rattana Satsadaram, is regarded as the most sacred Royal Temple in Thailand. It is located in the historic centre of Bangkok within the precincts of the Grand Palace. 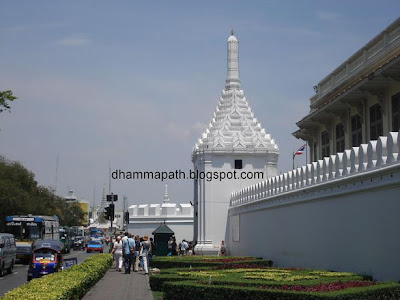 The main entrace of Wat Phra Kaew complex as seen from the road. 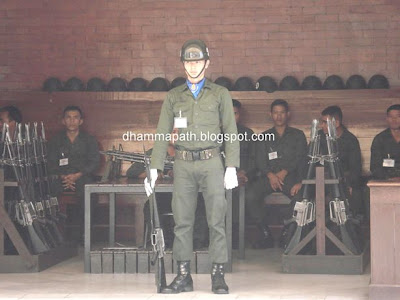 The Thai army are guarding at the entrance of Wat Phra Kaew. 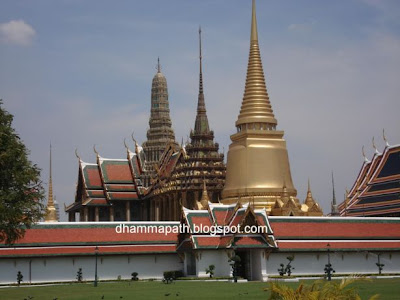 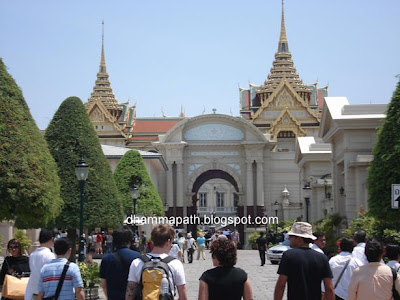 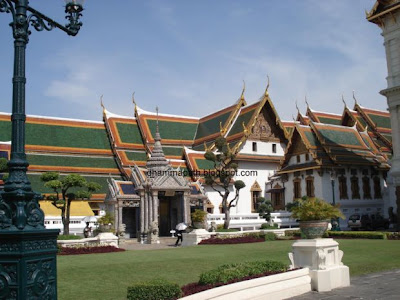 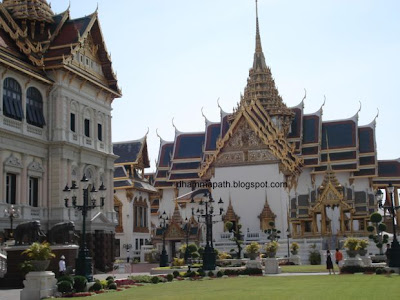 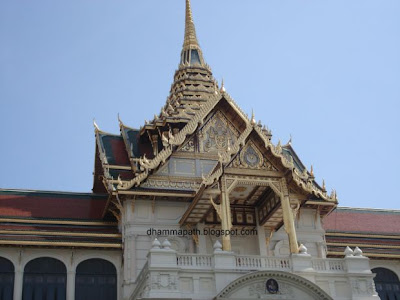 The Chakri Mahaprasat is the largest hall in the Grand Palace, built in 1882 by British architects, the architecture of which is fusion of Italian renaissance and Traditional Thai architecture. 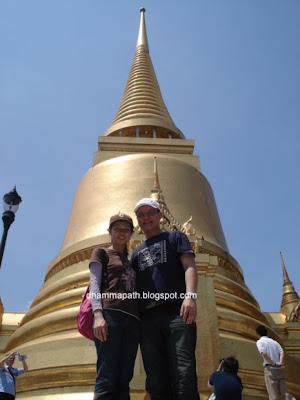 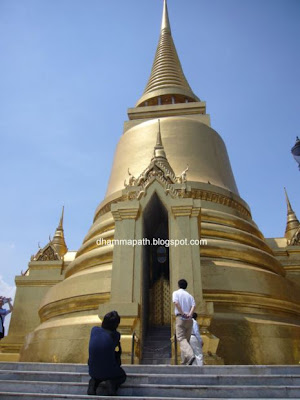 The temple grounds also depict three Chedis to its immediate north, which represent the changing centres of Buddhist influence. One such shrine to the west of the temple is the Phra Si Ratana Chedi, a 19th-century stupa built in Sri Lankan style enshrining ashes of the Buddha. 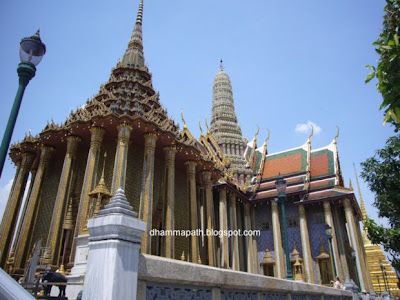 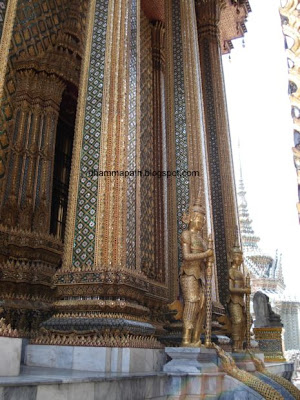 Rama I also built a Phra Mondop library in Thai style, in the middle of the complex, known as the "Phra Mondop". The library houses an elegantly carved Ayutthaya-style mother-of-pearl doors, bookcases with the Tripitaka (sacred Buddhist manuscripts), human-and dragon-headed nagas (snakes), and images of Chakri Kings. 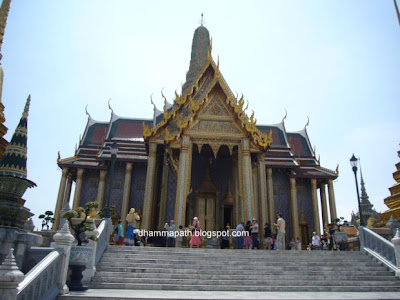 During the 19th century, the Royal Pantheon was built in Khmer style to the east of the temple, which is kept open for only one day in year, in the month of October to commemorate the founding of the Chakri dynasty. 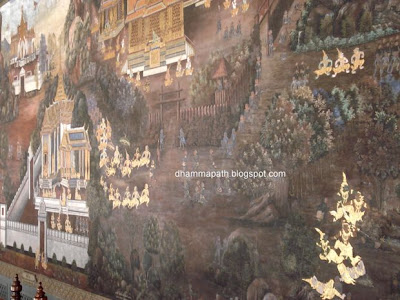 The entire complex, including the temples, is bounded by a compound wall which is one of the most prominent part of the wat is about 2 kilometres (6,600 ft) length. The compound walls are decorated with typically Thai murals, based on the Indian epic Ramayana. In Thai these murals are known to form the Ramakian, the Thai national epic, which was written during the reign of Rama I. The epic stories formed the basic information to draw the paintings during the reign of King Rama I (1782–1809). These paintings are refurbished regularly. The murals, in 178 scenes, starting with the north gate of the temple illustrates the complete epic story of Ramayana sequentially, in a clockwise direction covering the entire compound wall. The murals serve to emphasise human values of honesty, faith, and devotion. 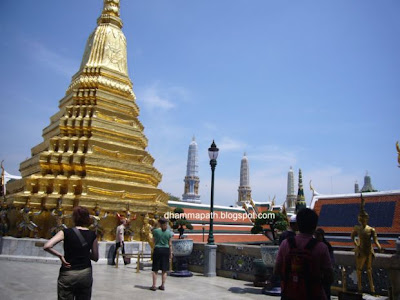 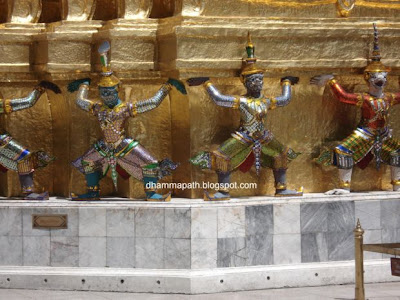 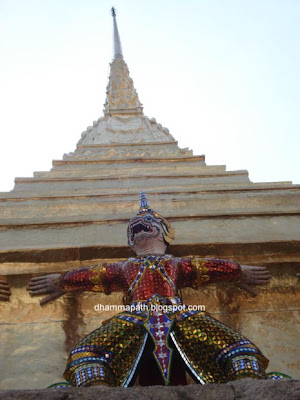 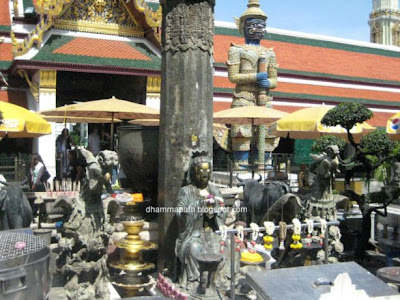 The Chinese statues venerated in front the Yaksha statues. 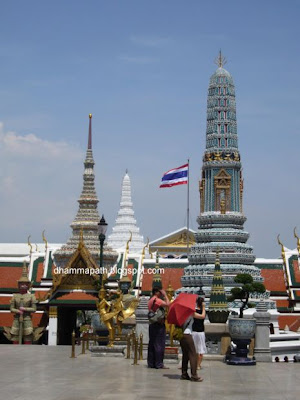 The compound view near the Phra Mondop library. 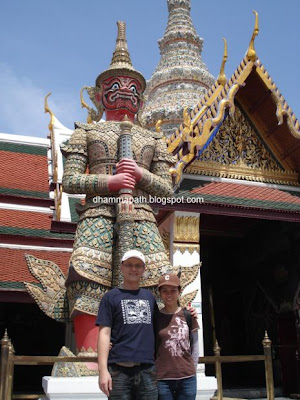 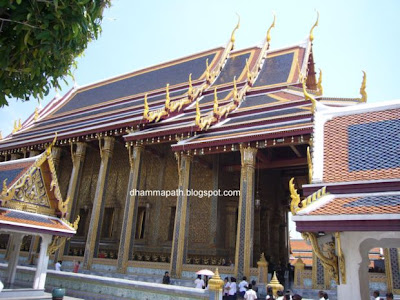 The overview of the Ubosot. 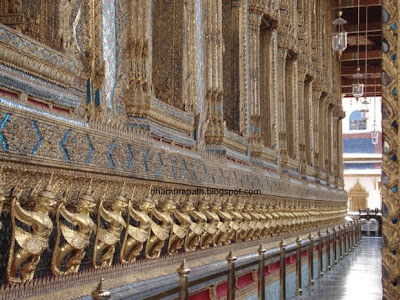 Garuda and Nagas, at the outside of the Ubosot Wat Phra Kaew. 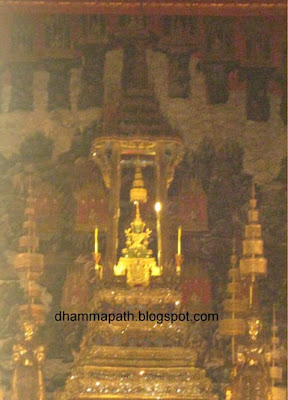