Wat Pho, the official name being Wat Phra Chetuphon Vimolmangklararm Rajwara Mahaviharn , is a first grade royal monastery, regarded as the most important one during the reign of King Rama I of the Chakri Dynasty. The importance of this is due to the King having managed the restoration of Wat Phodharam, an old monastery from the Ayutthaya period, and had it re-established as a royal monastery located near the Grand Palace. 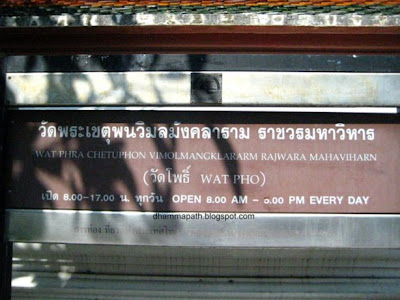 This is possibly the most interesting temple in Thailand as it combines history, medical science and is a center for meditaion and traditional massage training. Traditionally, temples were the schools as there was no formal education system, with monks providing basic lesson in both spiritual and secular subjects. King Rama III turned Wat Pho into a major centre for learning in botany, geography and history. 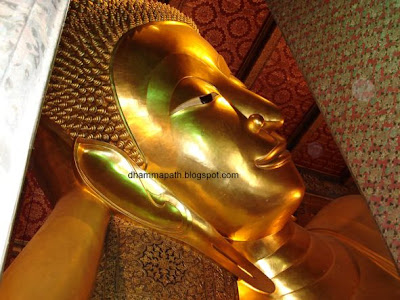 The Vihara of the Reclining Buddha or Phra Buddhasaiyas (Viharn Phranorn), the building is constructed for containing the important Buddha image, the Reclining Buddha. King Rama III told his nobleman, Krom Muen Pumintarapakdi (Prince Laddawan), the head of department of the Ten Crafts as a construction team leader. After having moulded the image of the Reclining Buddha, the team continued with the hall.The image was made of stuccoed bricks gilded with gold leaves. This statue is 46 metres long, with the dimensions at the face of 15 metres high and at each foot of 3 metres high and 5 metres long. 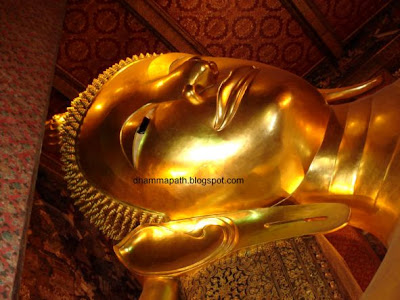 The serene face of the Reclining Buddha. 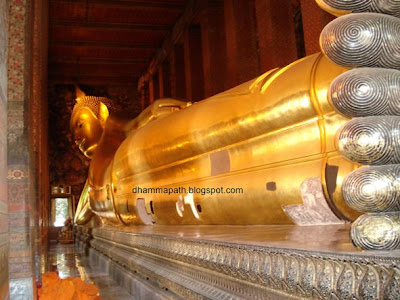 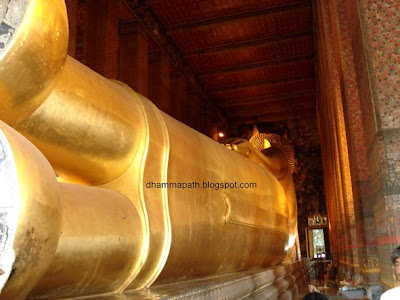 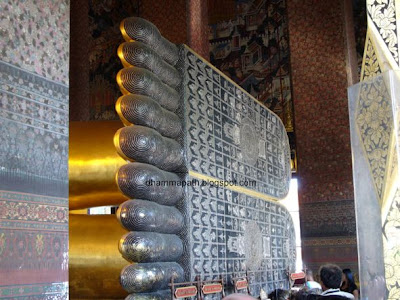 The feet and the eyes are engraved with mother-of-pearl decoration, and the feet also show the 108 auspicious characteristics of the true Buddha. 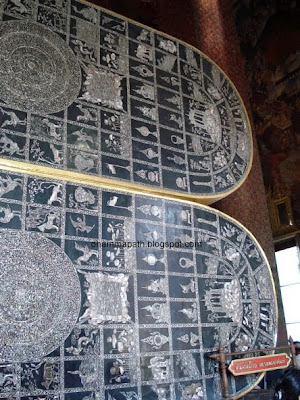 The soles of the statue's feet are inlaid with mother-of-pearl showing the 108 auspicious signs of the Buddha. This is the largest and most beautiful piece of fine arts of the Buddha image in a reclining position found in Thailand.
The mother of pearl inlay at the feet of the image is of Thai-Chinese style, as indicated by 108 auspicious signs portraying natural scenes of both Indian and Chinese influences. 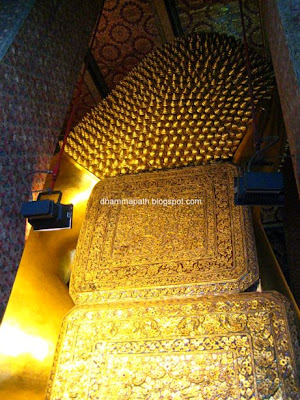 Back of the Buddha's head and "pillow". 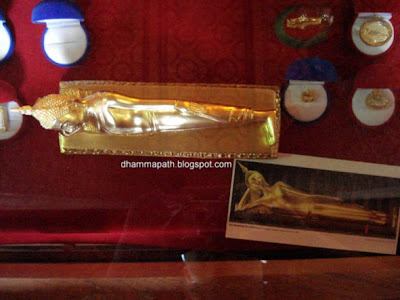 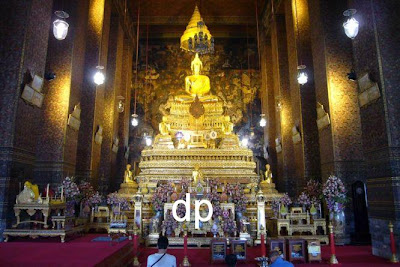 The principal Buddha image venerated inside the Ubosot is “Phra Buddha Deva Patimakorn” in a gesture of seated Buddha on a three tiered pedestal called Phra Pang Samarthi (Lord Buddha in the posture of concentration), and some ashes of King Rama I are kept under the pedestal. 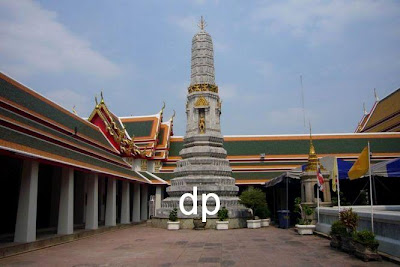 Phra Maha Stupa or Phra Prang Chedi, there are 4 Chedis at the corners of outer-side of the chapel yard. This kind of pagoda is specially termed “Phra Agghiya chedi”.
Each is tiled with marble, with 4 Khmer-style statues, tin gilded with gold leaves and decorated with glass inlay, of the so-called “Catulokapala” – the Guardian Divinities of the Four Cardinal Points- on its 4 corners.
The stupa on the northeastern corner is called “Phra Buddha Manggala Kayabandhana Mahastupa”,
the southeastern “Phra Buddha Dhammacak Pavattanapaduka Maha Stupa”,
the southwestern “Phra Buddha Vinaiyapitaka Sucigkara Maha Stupa”,
the north-western one “ Phra Buddha Abhidhamma Dharavasi Parikkhara Maha Stupa”. 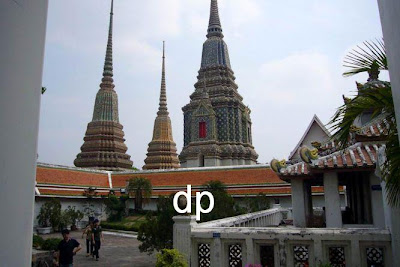 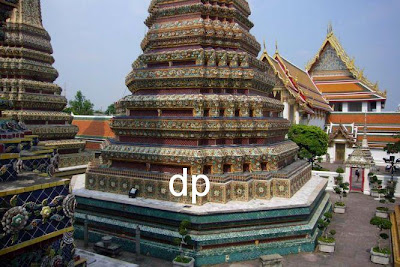 Wat Pho has 4 big chedis which were built on separate occasions to commemorate the first three kings of the Chakri Dynasty (two chedis for King Rama III). 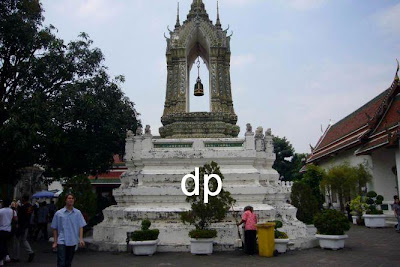 The bell tower of Wat Pho, next to the Ubosot. 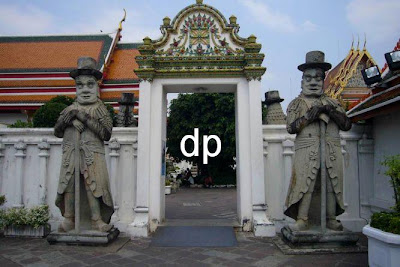 The Western style statues at the one of the entrance in the temple compound. 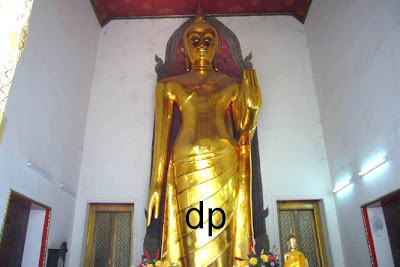 This Standing Buddha in the East Vihara is a 10 metres high bronze Buddha image, “ Phra Buddha Lokanart Sartsadajarn ” which was brought from Wat Phra Sri Sanphet in Ayutthaya.
.
See more Thai amulets at:
http://www.thaiamulets-dhammapath.blogspot.com/
Posted by Kenneth Phoon at 5:04 AM