Wat Phai Rong Wua is located at Tambon Bang Ta Then, Amphoe Song Phi Nong in SuphanBuri. This temple is famous and houses the world's largest cement Buddha image, fronted by the largest Gong and alms bowl in the world. There is also the world's largest bronze multi-spired building, known as Phra Wihan RoiYot, and the largest bronze Wheel of the Doctrine, or Dhammachakra (we see more photos in part:2/2). Now in part:1/2, we see more photos of the Garden of compound locations of significance in the Lord Buddha's life. These include the places where he was born, reached enlightenment, gave his first sermon, attained nirvana. There are also recreations of Buddhist hell and heaven. 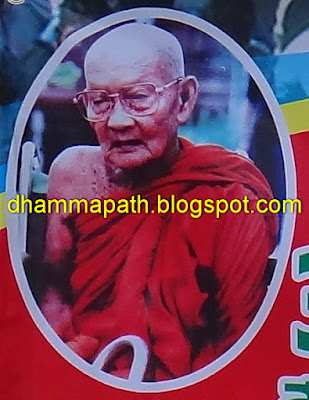 In year BE2479, a monk called Luang Phor Khom became the abbot of a neglected rural temple (Wat Phai Rong Wua) in SuphanBuri province. Over the next 50-odd years, LP Khom would transform the site into a grandiose monument to religious plurality, incorporating the iconography of multiple Buddhist traditions. He also vowed to erect the largest cement Buddha statue in the world on temple grounds. LP Khom assed away in BE2533 at the age of 88 years old. 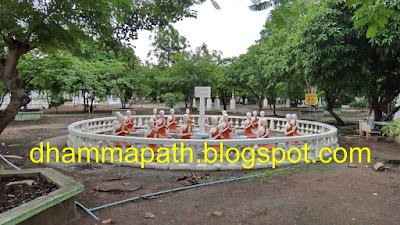 Phra Buddha gave his first sermon with his disciple received the teaching. 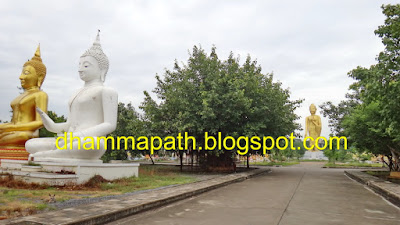 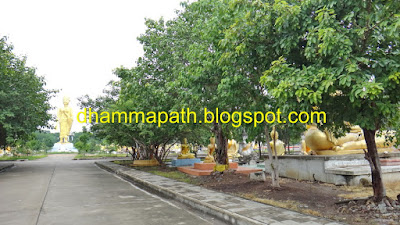 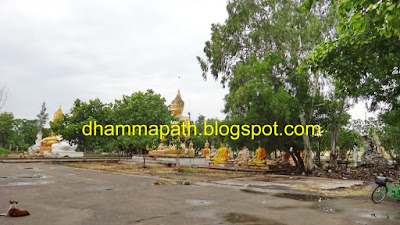 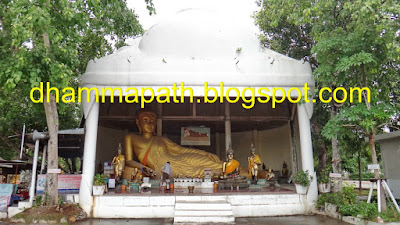 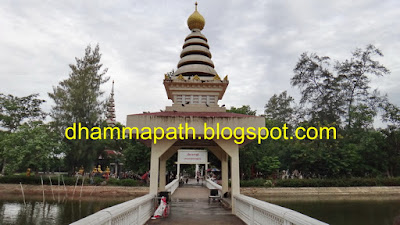 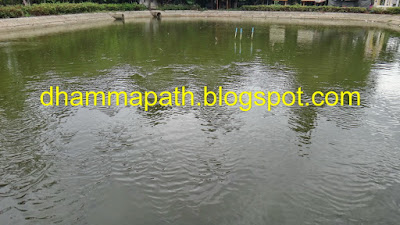 The pond of fishes and opposite is Land of Hell. 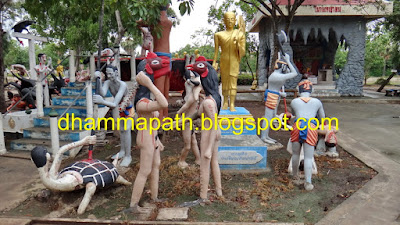 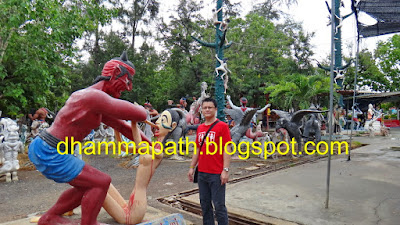 Me and photo taken at Land of Hell during my visited to Wat Phai Rong Wua. This place might be a bit scary for children but it still a must visit destination. 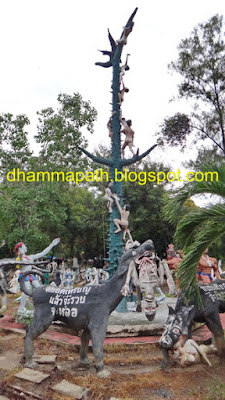 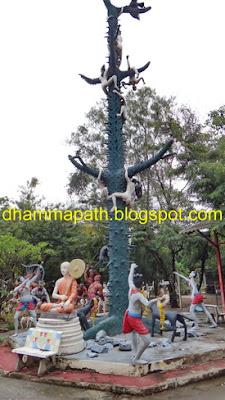 The punishment in Hell. 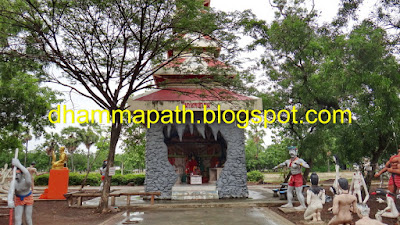 The court of Hell. 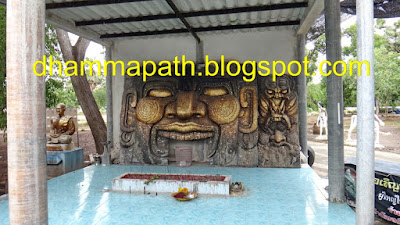 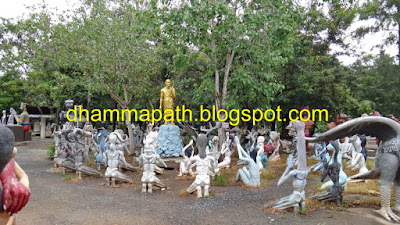 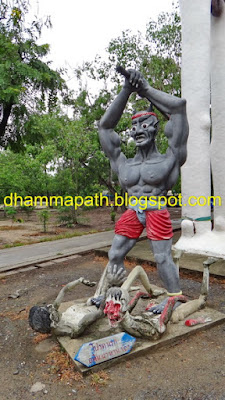 More statues at Hell of Land. 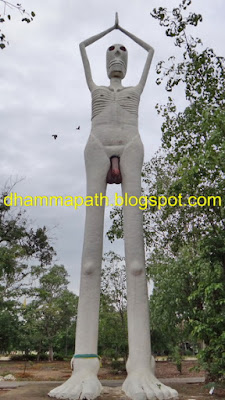 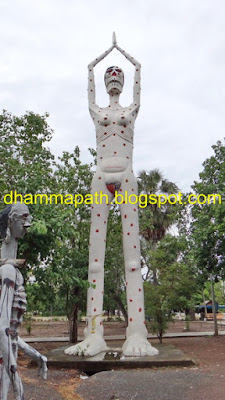 An atmosphere both merry and macabre enwraps Wat Phai Rong Wua, with these two elements converging in the elaborate hell garden presided over by two towering, ulcerated praed—hungry ghosts—one male and one female. 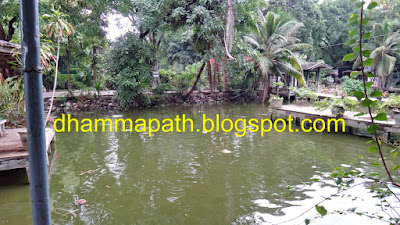 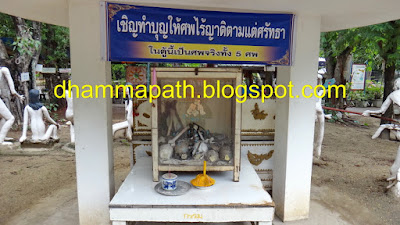 The shrine with human bone. 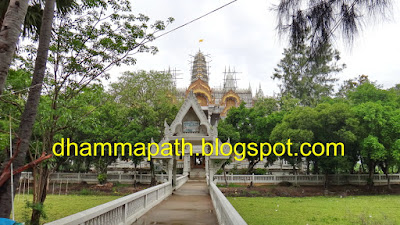 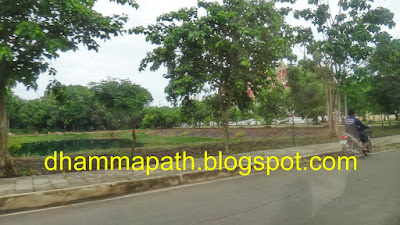 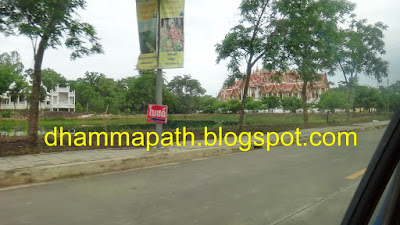 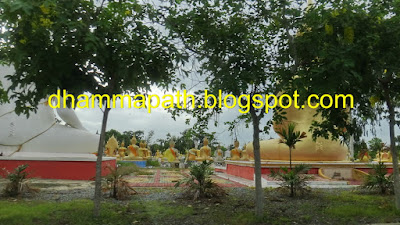 Wat Phai Rong Wua with literally 100pcs Phra Buddha statues at the garden. Photos took when drove car along the road.
.
See more of other Thai amulets at:
http://www.thaiamulets-dhammapath.blogspot.com/
Posted by Kenneth Phoon at 7:49 PM